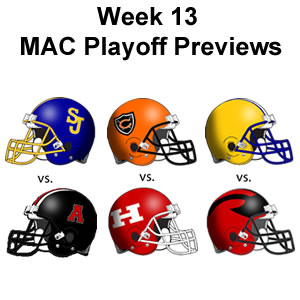 For the second week in a row, all three Midwest Athletic Conference teams logged playoff victories and advanced toward their respective goals of state football championships in the coming weeks.  The Delphos St. John’s Blue Jays and Coldwater Cavaliers had little trouble in their respective regional semi-final contests, while the Marion Local Flyers made things interesting by pulling out their victory in the closing minute.  Coldwater dismantled Doylestown Chippewa 49-21 in Tiffin while over in Findlay, the Blue Jays eliminated the Tiffin Calvert Senecas, 42-10.  In Piqua, the Flyers needed a last-minute touchdown to pull ahead of Covington before going on to win by the 35-28 final.  This week on Saturday, the Blue Jays will square off with Arlington at Lima Stadium, Coldwater will face Huron at Donnell Stadium in Findlay and Marion Local will return to Piqua to meet up with unbeaten Triad in the regional finals.

Last week, the Flyers bashed helmets with Covington knowing their possessions would be limited.  In the first half, Covington had three offensive series, while the Flyers had only two.  Unfortunately for Flyer fans, they found themselves down 14-7 at intermission.  The Blue and Gold climbed back into it though and with 2:34 remaining, went on their final drive of the night which ended with a touchdown pass from Adam Bertke to Troy Homan with less than 30 seconds to play.  The score bumped the Flyers in front for good, 35-28.  Homan finished the game with eight catches for 65 yards and a pair of scores, while Bertke connected on 16 of his 28 pass attempts for 199 yards and three touchdowns.  “A game like that is hard to predict sometimes – we knew that the Covington was an excellent team with a very unique offense,” Flyer head coach Tim Goodwin explained.  “We prepared the best that we could and our players played hard and it was just a tight game overall.  Adam Bertke was clutch when we needed him just as he has done for us many times in the playoffs before.  Hunter Wilker and Troy Homan also made some big plays, and Austin Albers had a huge catch on fourth down at the end of the game. Overall, our kids played as hard as they could.

The 12-0 Flyers will return to Alexander Stadium this week to face top-seeded Triad, who brings an identical 12-0 record to the table.   The Cardinals hit week 13 on the heels of playoff victories over league-foe Cedarville and Sidney Lehman and have enjoyed eight victories against teams with winning records this season.  “Triad is a spread team with good balance between run and pass,” Goodwin pointed out.  “They have been battling injuries and they had a very gutty performance against Lehman with many of their better players not able to go.  They are another undefeated team with a lot of resolve, so we just need to continue doing our thing.”

The Cavaliers wasted little time last week setting the tone in their victory over the Chipps by going 70 yards in eight plays in a drive that was capped off with a 13-yard pass from quarterback Brody Hoying to Adam Klosterman.  Coldwater added another touchdown a little later in the opening period before taking a 21-0 command into the locker room with them at halftime, as the Orange and Black out-offensed the Chipps 315-56 in the opening two periods.  They continued to add to their advantage with another touchdown less than a minute into the third quarter, and continued to roll from there by building a 49-0 lead before the Chipps scored three times at the end of the third and throughout the fourth quarter.  “Things definitely went the way we had hoped on Saturday,” remarked Coldwater head coach Chip Otten.  “The offense executed well and made big plays with several guys touching the ball. The defense was also very physical up front and stopped the run.  Our offensive and defensive lines were the standouts for the game – we really dominated the line of scrimmage with our technique and athleticism.  Offensively, center Austin Klosterman, guards Blake Spangler and Caleb Madaj, and tackles Jared Post and Nick Clune got the job done as did defensive linemen  Mitch Fullenkamp and Austin Klosterman at tackles and Nick Clune and Andrew Schwieterman on the ends.”

This week, the Cavaliers will tangle with Huron, a program they eliminated from the Division IV post-season in 2004 and again in 2005.  Huron meets them with an overall record of 9-3 with two of their losses coming to 11-1 Clyde and 11-1 Sandusky Perkins.  The Tigers closest victory unfolded last week when they edged Loudonville 17-13 and they are currently riding a two game winning streak after their regular season-ending loss to Clyde, 30-6.  “We have watched Huron on film and they are a solid team with an explosive quarterback,” commented Otten.  “They are similar to us in that they have athleticism across the board with multiple playmakers on offense and eleven guys who can run on defense.  Controlling a Brody Hoying-like quarterback will be the biggest challenge for us in Findlay on Saturday.   We will need to find what tools will work for us as the game goes along on offense – we feel like we have enough weapons to move the ball, but it’s finding the right ones at the right the time that will be the key.”

Last week against Tiffin Calvert, St. John’s head coach Todd Schulte had two objectives – continue to establish strong play up front while maintaining a powerful running attack and prevent Calvert’s all-everything quarterback from striking with big plays.  When the dust settled, the Blue Jay’s mission was accomplished on both fronts as they left Donnell Stadium with the 42-10 victory.  Senior running back Tyler Jettinghoff was a one-man wrecking crew for the Blue Jays as he rushed for 199 yards on 23 carries and crossed the goal line for all six of St. John’s touchdowns.  He picked up touchdown runs of 2, 65, 2, 36, and 8, while adding an 84-yard kickoff return to his evening to open the second half.  The 32-point victory helped the Jays to improve to 8-4 on the season, including victories in their last six games.  “I thought early in the game that we may have been a little surprised by the speed on their defensive line, but once we got comfortable with that it was business as usual,” head coach Todd Schulte pointed out.  “I thought our defensive line and backs played very well throughout the game – we had nine tackles for loss and eight pass blocks, so that is definitely something that will need to continue.”

St. John’s will take on Arlington this week, another program they have enjoyed a successful post-season against in the past.  The Blue Jays topped Arlington in the playoffs 24-7 in 2008, while blasting them again the following year by a final of 56-0.  The Red Devils come into the regional finals as the winners of three straight including last week’s playoff victory over Hicksville, 54-14.  Their three setbacks this season were to McComb, Liberty Center, and Liberty Benton.  “They are big up front on both sides of the ball and are led by their standout tailback,” Schulte advised.  “He has rushed for over 1800 yards and close to 40 touchdowns this season, and in the past two weeks alone he has picked up 505 yards!  The key for us this week will be to slow down the run game.”