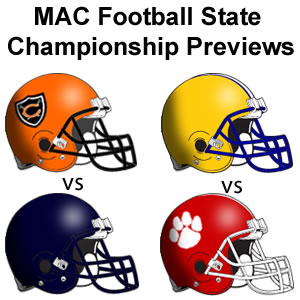 The final week of the 2013 high school football season has arrived, and once again the Midwest Athletic Conference will have the opportunity to bring home a couple of state championships from Stark County, repeating the feat from a year ago.  Both the Marion Local Flyers and Coldwater Cavaliers are in action at Paul Brown Tiger Stadium in Massillon on Saturday, as the Flyers take on the Glouster Trimble Tomcats and the Cavaliers will square off against the Bishop Hartley Hawks in a re-match of their week-two confrontation from earlier in the season.  The Flyers ended Delphos St. John’s season last week with a 35-6 victory, while the Cavaliers advanced with a 35-10 triumph over West Jefferson.

MARION LOCAL – TRIMBLE
When the Division VI format was introduced to begin this season, many fans felt the title was the Flyers’ to lose.  They have proven the pundits correct as they will be going for their third title in a row and the program’s seventh overall this weekend.  The 14-0 Flyers have averaged nearly 46 points per game in the playoffs and allowed 12 each time out.  The Blue and Gold have been challenged only once in the post-season – two weeks ago against Covington when they captured the 35-28 victory, but other than that no one has come within four touchdowns.  Last week against St. John’s, the Flyers piled up more than 400 yards of offense, led by running back Jacy Goettemoeller’s 134 on the ground and Adam Bertke’s 228 and three touchdowns through the sky.  Defensively, the Flyers limited St. John’s vaunted rushing attack to 167 yards.  “I think the offense played pretty consistent the whole game,” explained Marion Local head coach Tim Goodwin, who picked up his 51st career playoff victory over the Blue Jays. “We feel as though we left a couple of scores out there, but part of that was that was that we were playing against St. John’s.  We struggled early defensively making tackles, but I feel as though we adjusted after the first quarter and played well overall from that point.”

Flyer fans likely had to refer to a map this week to figure out where Glouster Trimble was from, but the Athens County school is making their tenth playoff appearance since 1980 and hold a 3-9 overall post-season record.  This season marks their fifth appearance in the past six years as they enter the contest with an unblemished record of 14-0 and a number three ranking in the final Associated Press Poll.  The Tomcats average 43 points per game and their average margin of victory this season has been 34 points with their stiffest contests coming in the past few weeks, winning by an average of just over five points per game.  A victory for the Flyers this week will push them past St. Henry and Versailles for the most football state championships in MAC history.  “Our coaches have actually followed them throughout the year because we saw them against Newark Catholic in a close game last year and heard that they had a lot back this year,” commented Goodwin.  “Their defense has not given up many points this year, and I am sure that they feel it is their strength.  They are pretty balanced between run and pass offensively, and their quarterback is a quick kid running ball.  It is a lot of fun to go through the playoff process with the team.  Each week it seems as though the players and coaches become closer and stronger as a unit.”

COLDWATER – HARTLEY
When Coldwater and Hartley locked horns in week two of the regular season, the Cavaliers were coming off of a season-opening loss to Kenton and knew that in order to make the post-season for the 17th year in a row a win over the Hawks was a must.  It was a tight game for a little more than a half, but the Cavs blasted to the 41-16 victory by the time the smoke finally cleared.  Despite the decisive victory, Cavalier head coach Chip Otten understands this time around will be completely different as his team makes their fifth straight appearance in the title game after winning it all last season against Kirtland.  “It is great satisfaction to see our players, and especially the seniors, get their chance to prove that they can continue the tradition of making the playoffs and now to play in the state championship,” Otten remarked.  “I am thankful for all the support of the school, athletic department, community, and parents.  I am especially grateful to the coaches that I work with every day.  I am fortunate to be at Coldwater.”

Last week, the Cavaliers eliminated West Jefferson 35-10 and were ignited by another outstanding performance from junior quarterback Brody Hoying, who ran for three scores and threw for two more touchdowns in the victory.  “The West Jefferson game was a good win for us – they were a good team and it was a four-quarter game,” Otten commented.  “Unfortunately for them, when their quarterback got hurt it really took away a huge part of their run offense.  Our run game also continued to evolve and our skill guys continued to spread the wealth and make plays.”

The fourth-ranked Hawks responded with 12 straight wins after their setback to the Cavaliers against eight teams who finished the year with winning records.  Following their 64-7 victory over Zane Trace to start the post-season, Hartley has notched wins over Liberty Union, Wheelersburg, and Manchester in the past three weeks by an average of 22 points per contest.  Hartley’s lone other post-season meeting with a Midwest Athletic Conference school was in 2004 when they fell to St. Henry 35-7 in the regional semi-finals.  A win for the Cavaliers this Friday will mark the first time in school history they win two state football titles in a row and their four titles overall will elevate them as the fifth conference school to hit the milestone.  “The score of our previous game against Hartley was not a great indicator of the battle,” Otten pointed out. “I think both teams are improved and both have played several good teams this season. They are different now offensively with the addition of Alonso Sexton (Duke commitment), who only played defense in the first game due to an injury in the preseason. We are looking forward to a great challenge for us to beat them a second time this season.”