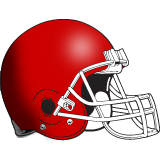 The Brad Luthman-era is set to officially get underway this week in St. Henry when the Redskins host the Covington Buccs at the Wally Post Athletic Complex on Friday night. Luthman, a Versailles graduate and former assistant at Marion Local, is excited to get the season underway with his new football family and points out some of the differences in his approach now that he is the head man. “I’ve learned a lot of things about myself in the process of assuming the head coaching position – there are certain situations where I act different now than when I was an assistant,” Luthman explained. “I’ve always been on-edge, ready-to-go kind of guy on Friday nights. I’ll be that way as a head coach too, but I’m sure that there will be some feelings, be it nerves or any other emotions, that will come into play this Friday night. I think that even the most seasoned head coaches will tell you that they are still a little nervous before every game, and I think that it is a good thing – it means you’re humble and respect your opponent and the game of high school football”.

The Buccs invade St. Henry for the first time since 1978 when the two programs engaged in a two-year, regular-season series. The Buccs took both games of the series in blowout fashion – 43-0 and 41-12 and they didn’t collide again for almost 20 years until they met in the 1996 Division VI playoffs when St. Henry downed the unbeaten Buccs 28-0 in the opening round of the post-season. Luthman realizes in order for his team to be successful on Friday, they will need to mature in a hurry against a solid, veteran Covington squad. “If we expect to succeed in our first game, we must change our pad level – the old saying holds true, ‘Low man wins,’ and Covington certainly gets off the ball low and hard on both the offensive and defensive lines,” Luthman commented. “We also need to pursue relentlessly and be great tacklers. AJ Ouellette is a standout running back for them who is a strong, tough runner and may be one of the best backs we see all season. To expect to win, we must be good tacklers at the point of attack and then rally as many red hats as possible to the play.”

The Redskins will try to advance to the Division VI playoffs for the second season in a row and a victory over Covington will go a long way in that goal for the young St. Henry team. “We need to start fast AND finish strong – values that all great programs relish,” Luthman advised. “We have been trying to work all off-season as a program that can be a solid second-half football team. We want to get to the second half with a chance to win and then believe that our work ethic will take us over the top as we play late into the fourth quarter.”

Football Friday Nights are finally upon us and Luthman is certainly geared up for the 2013 campaign. “I’m excited that football is back – I’m hard-pressed to admit to there being any better sport than high school football,” he commented. “Our team has worked hard, but there are still improvements to make, as there will be throughout the season. One of our core values as a program is to ‘Get better every day,’ and I think we have done that with the playing of each of our scrimmages. I hope that our improvement continues so that we are playing our best ball by the end of the season, but it all begins with Covington on Friday night”.