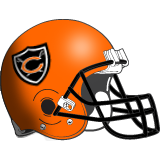 Last season, the Coldwater Cavalier football team ran the table en route to a perfect 15-0 season and the Division V state championship. With new faces up and down the field to begin the 2013 campaign, the Cavaliers opened this season with a 22-2 loss at home to the Kenton Wildcats last Friday evening. With little time to sulk, Chip Otten’s crew must head to Columbus this week for another matchup that looks difficult on paper – the Columbus Bishop Hartley Hawks. Despite their loss, Otten is pleased with several components of his team. “Our defensive line has been playing very well and their effort has been outstanding, while the offensive line has also been playing well and continuing to get better,” he remarked. “We need to be more consistent with offense and take advantage of opportunities when they present themselves. We were in Kenton’s half of the field five to six times and inside the 25-yard line three times and we didn’t get any points – we need to make those plays when they present themselves.”

Coldwater struggled to get their offense running against Kenton, as they totaled a shade over 200 yards, 180 of which came through the air as quarterback Brody Hoying completed 17 of 32 passes. Adam Klosterman pulled in seven catches for 103 yards in the defeat. Defensively, the Orange and Black held Kenton scoreless in the first and fourth quarters, but the damage was done in the middle two periods when the Wildcats jumped ahead 16-2 at halftime and extended it to 22-2 at the conclusion of the third period. Coldwater was led on the defensive front by Mitch Fullenkamp who recorded three sacks, two half-sacks, and several quarterback hits throughout the contest. “The defense played well and hard against a veteran Kenton team,” commented Otten. “One thing that I am pleased with is that our attitude and effort has been really good since the loss.”

In week one, the Hawks opened the season with a 38-6 thumping over the Amanda Clearcreek Aces, and Otten expects his team to have their hands full when they head to Columbus. “Hartley is very physical up front with a veteran quarterback and speed to complement their power wing-T runs,” he explained. “They are very well-coached and unpredictable on special teams. We need to get last week out of our heads. It is always tough to lose, especially when it hasn’t happened for a while. I need to remind myself and the team that and just play forward. We need to learn from last week, work on those things, and get ready to play against Hartley.”