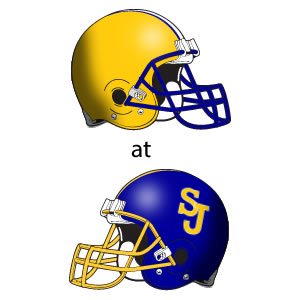 Year in and year out, whether regular season or playoffs, the Delphos St. John’s Blue Jays and Marion Local Flyers have engaged in the premier small-school Midwest Athletic Conference matchup over the past 15 years.  Thanks in part to a pair of outstanding veteran coaches and perennially outstanding teams, quite a few of their battles over the last decade-and-a-half have been classics.  This week, the unbeaten Flyers head to Stadium Park in Delphos on Saturday evening to square off with the 2-3 St. John’s Blue Jays.  A victory for the Flyers would tighten their grip on a share of the top spot in the MAC standings, while a Blue Jay win would help them build momentum and keep their hopes alive for a berth in the Division VII playoffs a few weeks from now.  “It seems like it is always a close game whenever we play them,” explained Marion Local head coach Tim Goodwin.  “Even years when the records would indicate that one team would have the advantage it doesn’t always go that way.  I think it is because we have played each other so many times over the years and just know each other very well.  We have also traditionally run a similar offense which adds to the familiarity.  It is a great rivalry based on mutual respect.”

Last week, the Flyers hosted Versailles at Booster Field and had little trouble dismantling the Tigers 28-0, powered by Jacy Goettemoeller’s three touchdowns and a relentless defense that has been suffocating in the first five weeks of the season.  Against Versailles, the Flyer defense held the Tigers to just four yards rushing.  “We have played good team defense to this point – last year we played a lot of sophomores on defense and gave up more yards and points than we are used to,” Goodwin pointed out.  “This year we are an experienced group and we have played like it. This week will be a different challenge with the option scheme that St. John’s runs.  We have not seen this style this year so we will have to play sound football in a way that we are not used to. We just need to keep refining our techniques to continue to improve.”

The Blue Jays started the season 0-2 before downing St. Henry in week three and falling to Coldwater the following Friday.  Last week, they got back on track with an exciting 34-27 victory over Anna, in which they scored the winning touchdown in the final seconds of the battle.  Running back Tyler Jettinghoff paced the Blue Jay attack with three touchdowns.   “Our players have continued to work hard – offensively it has been Luke MacLennan and Tyler Jettinghoff, while defensively Jason Witler and Cody Looser have been playing very well,” St. John’s Todd Schulte commented.  “I thought last week was close to a must win for us in regards to our mental state.  It is hard to keep working and not see the results you want, so that was big for us.”

While both teams enter this week’s fight with separate hopes pinned on the outcome, each coach understands the challenge their opponent brings.  “Their overall talent is pretty darn impressive,” praised Schulte.  “They seem to always be on the same page as an offensive or defensive unit, so we are going to have to have minimal mistakes and hopefully put their offense and defense in situations that they will make some mistakes.”  Goodwin concluded, “St. John’s is one of the few teams on our schedule who is committed to running the football, which is a totally different style and mindset when we play them.  Their running backs, Jettinghoff and MacLennon, are tremendous and their quarterback has really improved since the beginning of the year.  They have a big offensive line that comes off the ball well, so we will really have to be stout up front defensively in order to put ourselves in a position to come out on top.”