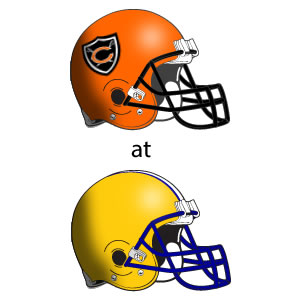 This week in Maria Stein is the battle that most fans have had circled on their calendars for nearly a year as the Marion Local Flyers entertain the Coldwater Cavaliers in what will likely decide the outcome of the 2013 Midwest Athletic Conference championship.  The MAC’s two winningest programs finished 1-2 in the league last season when Coldwater breezed through the conference slate 8-0 and Marion Local ended up 6-2 in league play.  Combined, the two programs have finished either first or second in the conference for each of the past 20 seasons.

This year’s fight at Booster Field will pit the Flyers’ suffocating, league-leading defense against MAC Player of the Year front runner, Coldwater quarterback Brody Hoying.  On the other side of the ball, Coldwater’s defense hasn’t been too shabby either as they have allowed ten points per game and a conference-best 6.4 points in MAC games.  The Flyers have been averaging an MAC-best 33 points per game, but will likely be without the full services of quarterback Adam Bertke or top running back Jacy Goettemoeller.  “Certainly it is no surprise that Coldwater is in this position even after graduating all of those seniors – they have a strong program and always have numerous athletes availablewho are ready to step in,” explained Flyer head coach Tim Goodwin.  “ I think there will be many good matchups during the game.  Certainly they go as Brody Hoying goes on both sides of the ball.  We need to limit their big plays on offense and special teams and be opportunistic offensively when we have our chances.”

Last week, the Flyers dominated St. Henry 35-7 to improve to 7-0 on the season and although Bertke was out of action and Goettemoeller saw limited play, they had little trouble with the Redskins.  In the victory, Dustin Rethman led the offense with 73 yards on the ground and 147 through the air with a touchdown in each category.  “We got off to a little bit of a slow start (against St. Henry), but we settled down and made some plays – we were happy with how we played the middle two quarters,” Goodwin pointed out.  “It is a matter of adjusting to the teams’ new strengths.  Offensively, some of our skill guys don’t have great numbers because we are pretty deep in some spots and the ball ends up being in a lot of different hands.  Defensively has been similar – we have played solid team defense all year.  Several players have performed at all-league levels for us with really one or two at every level of the defense.”

The Cavaliers also enjoyed a lop-sided victory in week six as they blasted Anna 43-7 in Coldwater to improve to 6-1 overall.  The Cavalier ground game was in full force as they racked up more than 200 yards, led by Hoying’s 76 yards and four touchdowns.  They are also no strangers to the injury bug after several starters were sidelined earlier in the season.  “Certainly Brody Hoying has been an outstanding playmaker on both sides of the ball for us, and Adam Klosterman has made several big plays offensively as well,” Cavalier head coach Chip Otten commented.  “On the defensive side, the defensive line has been outstanding, while Mitch Schoenherr in the middle leads the area in tackles, although we may not have him this week due to injury.  One of our mottos with injuries has been ‘next man up’.  We have mixed and matched different guys, and in the process we actually found a couple of young guys that are playing well in those replacement roles.”

Although this week’s meeting holds MAC title implications on the front burner, both coaches concurred that the playoff-like atmosphere in Maria Stein will be sizzling and will benefit both of their teams as the post-season looms just a couple of weeks away.  “This week will be a great battle between our skill and their skill – it is good to know that we are still playing for a league title possibility and our playoff spot,” Otten remarked.  “It also makes it so much more fun when there is a lot at stake and the atmosphere will be electric, just like in the playoffs.”

Goodwin concluded and agreed.  “Games like this one have traditionally given us an edge over some teams at playoff time. This year has been a little different in that we have not been challenged as much in the second half of games as usual. We will be challenged in every facet of the game and we are looking forward to it.”